’Now! Now!’ cried the Queen. ‘Faster! Faster!’ … Alice looked round her in great surprise. ‘Why, I do believe we’ve been under this tree the whole time! Everything’s just as it was!’
‘Of course it is’, said the Queen. “What would you have it?’
‘Well, in our country,’ said Alice, still panting a little, ‘you’d generally get to somewhere else – if you ran very fast for a long time, as we’ve been doing.’
‘A slow sort of country!’ said the Queen. ‘Now, HERE, you see, it takes all the running YOU can do, to keep in the same place. If you want to get somewhere else, you must run at least twice as fast as that!’

Lewis Carroll, Through the Looking Glass

The notion of an architecture of movement has always remained problematic given the immobility of typical built environments. And yet, Cedric Price, a British architect, not only theorized that movement was integral to architecture but he reflected this in his architectural practice. From the 1960s and into the early 1970s, his visionary thinking contributed to the development of new philosophies about architecture, time, and space and within the city. It was also during this period that many younger architects saw the need for a radicalization of architecture.  They began to envision a built form that was no longer merely static, but instead comprised of spaces in time that both informed and were informed by the complex social, economic and cultural changes of dynamic societies. This view also contributed to a shift in the thinking of the ‘city’ as well.  It was no longer conceived as a cohesive structure but instead as an unstable series of systems, in continual transformation, constantly reorganizing and rearranging itself through processes of both expansion and retraction.

Price espoused that time was a critical yet forgotten component of architecture. Reference to movement by necessity is a reference to time. These concepts inform each other and receive expression in discussion of speed. For a building to be in constant motion it would be difficult to locate and define (on paper), because its position would be changing at the moment of its (false) definition. Price believed that this motion could be defined because we already have a ‘questionable’ language for describing speed and movement in general terms. Cedric Price in clarifying these concepts stated in an interview with Hans  Ulrich Obrist that “movement implies a measurable interval, always in time and frequently in distance… mobility describes the capacity for movement.”

According to Price, time played two important roles in architecture, the potential needs of the built form must be recognised, but since an architect cannot accurately predict the uses and changes over time, the architect must “acknowledge the impossibility of totalised planning, and build in a degree of indeterminacy to allow for uncertainties in program, obsolescence and complete changes of use throughout the life of the building.” However, Price also recognised that if a building has outlive its usefulness, regardless of how well it anticipated the uncertainties, at that point it should be dismantled not retrofitted.

The Fun Palace was conceived by Cedric Price and Theater Director Joan Littlewood as a laboratory of fun and a university of the streets that was not driven by an economic agenda. It was to be located in the Lea Valley in London’s city core. The initial source of inspiration was to re-invent the 18th century Vauxhall Gardens under an all-weather roof. The attraction to the Vauxhall Garden was it encompassing of different social classes, where patrons enjoyed music, lights, fireworks, walking, and the gardens in an open-air atmosphere. They saw this project as an attempt to deviate from the accepted notion of a conformed environment because the individual was in control of their own “self-participation” in creating their own “physical environment.”[1] Price acknowledged that while the activities offered by Fun Palace were already available to the public, it was the ‘inter-accessibility’ of the activities and their juxtaposition to each other that would allow for the creation of new activities and experiences.

The configuration of Fun Palace was similar to a basilica with a central nave and two aisles, replacing the transept “was a moving gantry crane spanning over a system of 5 rows by 15 steel columns … The central nave [would] host the mass activities (movies, theatre and rallies) while the side aisles [would] hold “the human servicing activities” such as restaurants, bars, children areas and workshops … The adjustable sky blinds protect the palace-goers from the rain while vapor and warm air barriers eliminate the need of external walls. The resulting space modifies its shape through temporary and variable barriers: fiber panels, optical barriers, pressed aluminum curtains, audio-phonic curtains and curtains made of quilted lead foil.”[2]Also included in the plans was a high-level suspension grid, that would be the only fixed component of the structure, everything else was capable of movement. Decks and elevators would provide pedestrian movement throughout the complex. The plans deliberately did not include an entranceway which allowed individuals to walk freely without the interference of a prescribed pathway. 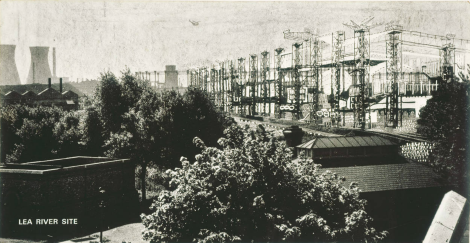 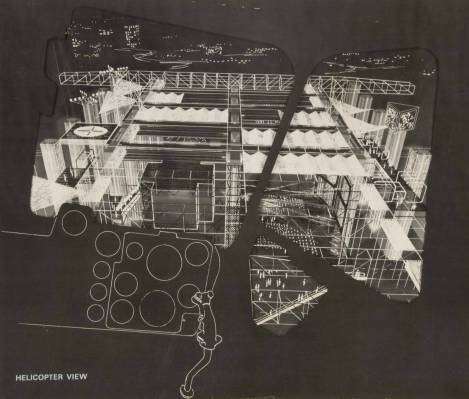 I thought I would highlight this apartment in Hong Kong, designed by Gary Chang an architect, which transforms into 24 different designs all by sliding panels and wall a process that Price envisioned for Fun Palace.