I been reading two books “MapHead” by Ken Jennings and “Everything Sings: Maps for a Narrative Atlas” by Denis Wood. According to Jennings he has been a map geek since he was six years old and is completely obsessed with all aspects of cartography, geography and mapping. While I wouldn’t consider myself a ‘map geek’ or do I think my interest in maps is obsessive, I did find many of his chapters insightful and introduced me to some perspectives that I had not considered. For instance his observation of map shapes that he refers to as ‘separated at birth’ is thought provoking.

I still think this book is relevant even with “paper maps” on the extinction list replaced by Google and GPS maps. My interest with maps, especially historical maps, was the presence of the human hand and especially with medieval maps the presence of a narrative (I wrote more about that in a post titled “Diagram Mapping.”) Google Earth despite all of its functionality and minute mapping of pathways, trails and building interiors, there is something very sterile about looking at a landscape frozen in time. I notice recently that Google Earth has included a historical function (I haven’t been on it for so long that I am not sure when it was added) in which you can see a history of a place over a period of time allowing you to see any transitions that might have occurred over the years. While I found this in itself not that exciting, what did start to peak my interest was seeing the time of the day recorded through the cast shadows of hydro easements, bridges and other city infrastructure.  Many of these structures haven’t changed since Google has started recording their maps but the time of day when these images were taken has changed  and is documented over the years. Bodies of water are also interesting to look at because not only are shadows recorded but so is low and high tides and cargo ships in ports have new ‘cargo’. I realised that I was drawn to these slight inconsistencies because, in way, they provide a narrative to the maps and record the flow of things. (Infact, I became so interested in these inconsistencies that I am currently starting a huge drawing that documents the lumber boons on the Fraser River over a period of 10 years.)

While I was reading “MapHead” I somehow stumbled on “Everything Sings: Maps for a Narrative Atlas” by Denis Wood. This book has been republished in 2013 and is a revised and expanded version compared to the first edition. This book documents Wood’s mapping of his community of Boylan Heights in North Carolina. Wood doesn’t use traditional mapmaking techniques and instead has combined the invisible, the overlooked, and the somewhat seemingly insignificant to create a narrative about his neighborhood and present a new perspective of looking at a community and understanding its inhabitants. While the maps presented in this book aren’t traditional ‘paper maps’ and you couldn’t use them to navigate through the landscape they provide a story that Google maps cannot. Interestingly both of these books highlight how mapping and understanding our landscape is so much more than a digital representation of it. 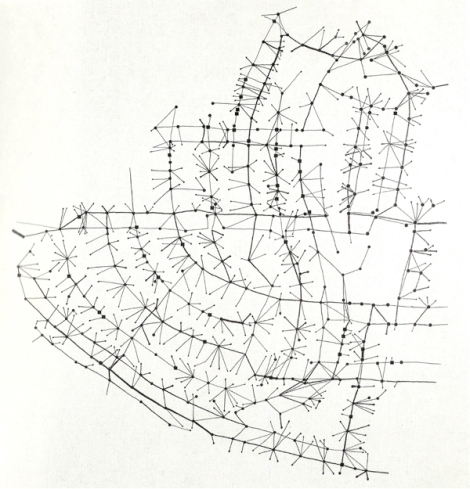 One response to “Narrative Atlas”