Bangladeshi volunteers and rescue workers pictured at the scene after an eight-story building collapsed in Savar, on the outskirts of Dhaka, on April 25, 2013. (Munir uz Zaman/AFP/Getty)

With the recent tragedy of Bangladesh much discussion has been centered on the retailers, who need to improve their ability to safe guard and protect the employees. I don’t disagree with this argument; however, there is a lack of critical discussion around the West’s insatiable desire for cheap goods. Quantity has prevailed over quality. What I found more distressing is that in the West we really have lost sight of is the price of a product produced by an individual paid a living wage. I remember a couple of years ago having a discussion with a friend about a particular local clothing store in Toronto that carried their own line of clothing that produced in Toronto. My friend was complaining how expensive the clothing was and while I agreed that the items were more money compared to similar items in chain stores. These particular items of clothing were manufactured in Toronto and the individuals were paid a “Canadian hourly wage” instead of a $.25 hourly wage. I could see a light bulb going off and her realising why this Canadian made clothing was more expensive. As consumers we balk at prices and continually demand them to be lower instead of reducing the amount of purchases we make.  I hope that with the most recent building collapse in Bangladesh, that as a society we really start looking at our own consumption practices and instead of demanding the cheapest product we start demanding quality products where individuals are paid a living wage.

I saw this article on a friend’s facebook page and the images captured my immediate interest. The images were of Chinese workers balancing surreal amounts of stuff on their bikes. I couldn’t even image the weight of these loads and was in disbelief  (partly because I have attached my son’s tandem bike to my bike and we do errands together and even though it is only about an extra 70 pounds going up hills is extremely painful and kinda unsuccessful.) As I saw more images, I began to wonder if the images were staged because they were too beautifully composed. The images are from a body of work entitled Totems by French artist Alain Delome and upon further reading I found out that the images were ‘photoshopped’ to exaggerate the loads and emphasis consumption and I became less interested. Delome says that his work explores globalization and consumerism but “it is above all a way to make people think about the consumer society we live in via the ‘Made in China’ phenomenon, with all its identical and exchangeable objects produced in big quantities.” I don’t deny that these images speak to consumerism but what struck me with them was how clean and beautiful they were. And with the aftermath of Bangladesh we have learned that consumerism is anything but ‘clean’ and ‘beautiful’ and instead really messy, dirty and destructive. Delome’s images are beautiful but I am unsure if they truly express the reality of consumerism. Or do they?  This is where I am having a dilemma of consciousness. I have been having this debate for a while with certain artists who use photography as their medium to depict consumerism. As images, they are successfully composed, technically perfect, and include a compelling subject matter but as an artwork that is critical of the themes of consumerism and globalization do they work? Are they successful?

One of the artists that I really have difficulty is with acclaimed ‘Manufactured Landscape’ artist Ed Burtynsky, a Canadian photographer, whose work explores the impact of humanity’s expanding footprint and the substantial ways in which humans are reshaping the surface of the planet. When I first saw his quarry and tailings series I was really struck by how powerful his images were. However, I had heard him talk about his work a couple of times and he really side-stepped the ‘politicalness’ content of his work and only talked about it in terms of documentation. I was very unsatisfied about his response and it led me to really think about what the role of an artist was and their responsibility to their content. I don’t think that it is enough to take beautiful, technically perfect photographs of a contentious topic such as consumerism and its effect on the environment without acknowledging the complexity of subject matter and the role of the gaze? 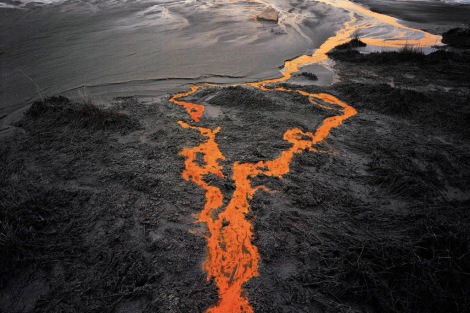 5 responses to “The Contradiction of Consumerism”