Kim Dingle, Maps of the U.S. Drawn from Memory by Las Vegas Teenagers, 1990

Do maps create or represent reality? And what is the reality that they purport to either create or represent? Is reality truth or is it perception? And, how much does perception affect what one knows to be the truth? Is a map a figment of the imagination? Do maps lie or do they make the truth visible? A mental map is map that describes an individual’s own internal map of their knowable world. It may be local (as local as the area inside a house), regional, national or international.  Mental maps draw upon a person’s memory and their point of view. They are not practical; they simply show a cartographer’s perceptions of their surroundings and the way they live in and move through physical and psychic space. Therefore, mental maps are personal and idiosyncratic and are usually a mixture of both objective knowledge and subjective perceptions. Perhaps another word to describe the mental map is that it is composed of “objective expressions”. They contain real locations or specific landmarks or geographic features, such as body of water, road systems and architectural buildings. They also contain more subjective information, such as impressions of places, estimations of space and location, and a sense of connections made between places that reflect the mapmaker’s own predisposition. Mental maps can serve as indicators of how well we know the spatial characteristics of place and how those characteristics help to define each of us.

Since the early 1990’s Franz Ackermann has developed small-scale mixed media drawings from his wandering at street level. This maps which he calls Mental Maps document his experiences and encounters with cities. His maps configure familiar fragments of architecture and landscape, and roadways, passageways and conduits are overlaid and superimposed over one another. His Mental Maps document his reaction to the complexity of modern urban space as it records and combines his  external “real” view of locations with his “subjective” view about them. 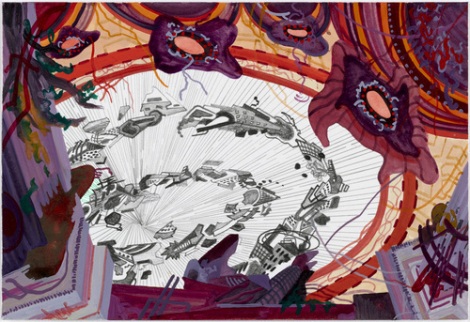 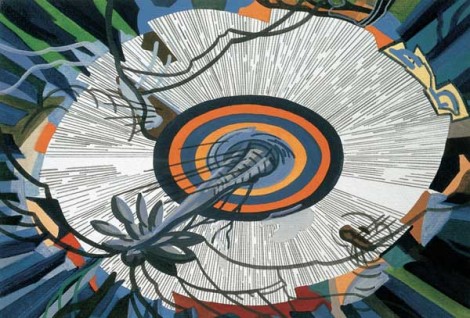 Franz Ackerman, Untitled (Pacific no. 42, A location your business will treasure), 2000

Jessica Rankin’s work features a series of ‘mental maps’, with codes, signs and symbols that explore ideas of memory, intuition and interpretation. Rankin’s compositions are influenced by personal experience and by cartographic tradition. 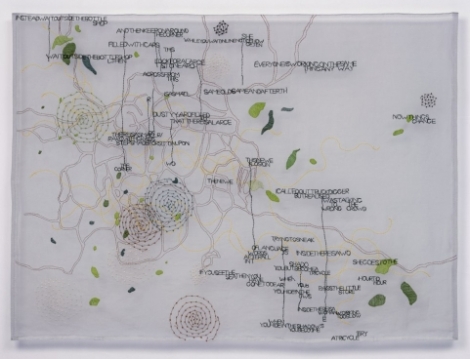 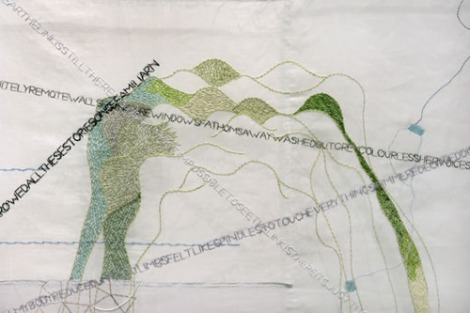 Julie Mehretu wouldn’t characterize her drawings as mental maps because they are not necessarily depictions of personal experiences with spaces or places. However, I do find that her strategy of grabbing images from her computer, projecting them large (on paper, canvas, walls) she superimposing structures and locations fuses real geographic spaces together into a new, heretofore, unimagined geography. She uses directional arrows and linear vectors to expand and compress the new places she creates. She recombines real places and under the imaginative actions of editing and recombining creates a new space to become the subject, possibly, of someone else’s mental map. 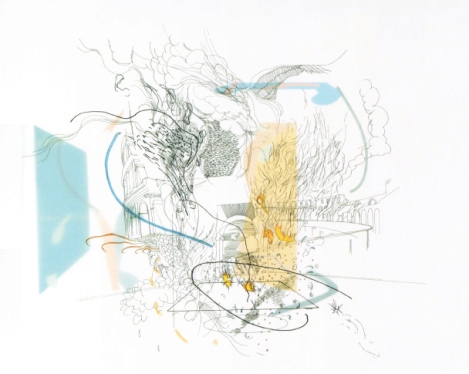 5 responses to “Do Maps Create or Represent Reality?”