I was reading an article posted on Arkinet titled, “Another New City in China Bites The Dust.” The year old post got me thinking again about Celebration, the planned community created by the Walt Disney Company in 1994 in Florida. Disney’s effort suffers many failings  (I think I will have to write another post elaborating the problems in greater detail), but I want to write about Celebration’s Market Street, a downtown fashioned after a 1940’s small town in America. Market Street was developed and established before most residents had even moved into the “neighbourhoods” that would support the merchants on the street. Highly unorthodox in city planning to be sure. The market follows demand, not the other way around but since Disney controlled the property they sold businesses on the idea that the town would attract Disney tourists. However, Celebration wasn’t DisneyWorld, and the tourists did not come and the retailers soon realised that the local market could not support them. The stores and restaurants carried goods and provided services that were geared towards tourism and were too expensive and did not meet the practical requirements of the local community. The residents wanted a downtown with businesses that served their needs such as a hardware store, a dry cleaner and inexpensive food outlets. But these practical considerations seemed very “unsexy” to the planners as they would upset the tasteful ambience they contrived for Market Street. In the end, many businesses had to close down and were eventually replaced with more community friendly establishments. The failing of Disney’s pre-planned Market Street was the assumption of what the residents should want instead of what the residents would need. Disney expected residents to conform to their notion of the market rather than having the Market Street conform to the needs of the community.

Market Street was obviously a small-scale failure compared to Qingshuihe, China but the philosophies behind both plans seem to be the same.  The Chinese government wanted to build a city from scratch as a means of attracting investment and Qingshuihe was built 20 km from the old city center. Qingshuihe was started in 2005 but ended two years later after funds ran out. The distance  was a key factor that discouraged people from moving there. Expecting entire communities to uproot themselves from their social, historical and cultural context is not realistic. What remains now is a ghost town but this ghost town is much different from the ghost towns of our past since this town was never inhabited. 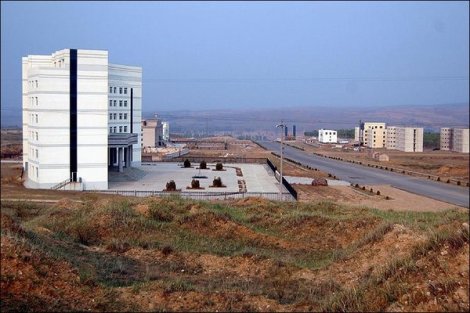 I immediately thought of Janice Kerbel’s Ghosttown: Deadstar a plan for a “new” ghost town. Taking the form of a town plan, it uses the conventions of urban planning and the history of abandoned settlements, the orientation of extinct celestial formations and the habits of the supernatural to envisage a timeless settlement for ghosts. 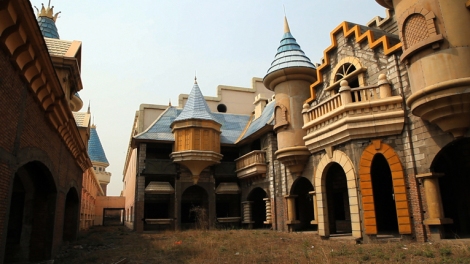