I could tell you how many steps make up the streets rising like stairways, and the degree of the arcades’ curves, and what kind of zinc scales cover the roofs; but I already know this would be the same as telling you nothing. The city does not consist of this, but of relationships between the measurements of space and the events of its past…

In its most general sense, a bridge is a means of connecting two points: a physical passage from one point to another.  It ‘tacks’ the city together forming a complex network of urban forms. Bridges are defined as much by their connective overlays as by their architectural matrix. Architecture and built form are about occupying space, not about the infrastructure, walls or skin but instead how these elements organise, utilise and enclose space. Bridges do not arrange space but instead interlink space with other spaces. Paradoxically, a bridge materialises space but in doing so becomes a ‘non-place’.

In Franz Kafka’s short story The Bridge, the protagonist is himself a bridge. He clutches one side of a gorge with his hands and the other with his feet. He expresses his desire to fulfill his function as a bridge, to be walked all over from one side to the next. He wants to be utilised, to be useful, to be important, to have a purpose, and ultimately to make the connection between himself, the pedestrian and the two sides of his desire.  He gets what he wishes for but unable to adjust the shifting weight upon his back, he structurally fails and he and his pedestrian plunge into the rocky waters below.  Desire alone was not enough to provide him with the structural integrity he needed to bridge the gap. But, the idea of the bridge, the bridge as a metaphor, was not enough to satisfy his desire and he needed to build a bridge, to realize his idea of the bridge.

Marc Auge, author of Non-Places: Introduction to an Anthropology of Supermodernity  suggests that non-places do not contain any organic society. They are places were travel and interchange occur. Similar to airports, airplanes, trains, railroads, subways and shopping malls, I feel that bridges also function as intermediary site because they accommodate transfer from one place to another.  I am really interested in this idea that bridges could be considered a non place. A place balancing between  potential interaction and the interaction of potentialities.

I think this notion of non place is further blurred with the Moses Bridge. The Moses Bridge in Fort de Roovere,  the Netherlands designed by RO&AD is a sunken bridge that emulates a trench and appears invisible to an onlooker. 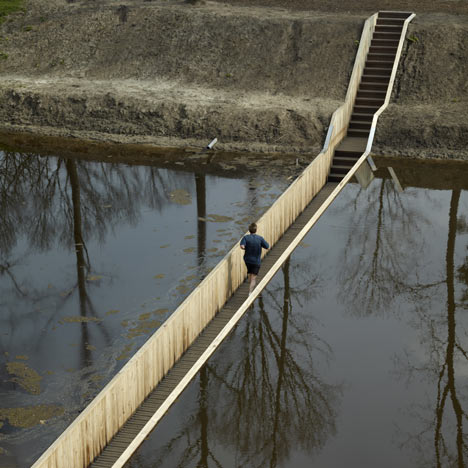 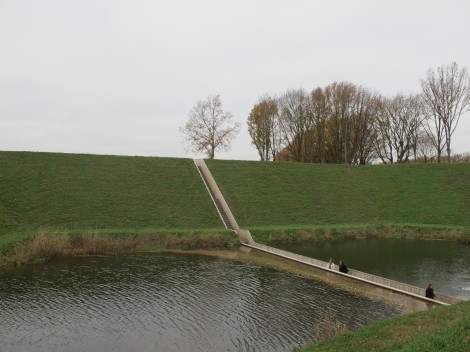 One response to “Pedestrian Bridges”